Feedback left from others:

*The following are some of the ways you can utilize this software.

On Thursday 28th we took just 2 games from the selections produced for that day.

Firstly considering the 1st Half Ratio for Cremonese v Pisa was 1.75 and the Software showed a goal in the first half and a goal in the second half, the match looked good! 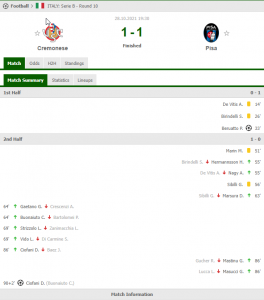 Then as the 2nd Half Ratio for Cittadella v Parma was 2.12 and the Software showed 2 goals in the second half, the match looked good for the second half! 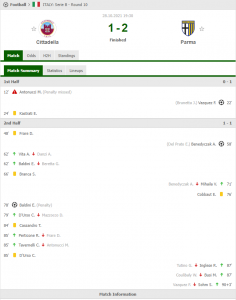 From a £10 Stake and the use of 2 matches I made £35.45 Profit, this in itself would pay for the Software for the full season.

Our Software is designed to effortlessly calculate the Goal Ratio by using basic math to give a prediction for the First Half and Second Half outcome of a match.

We have found that the Goal Ratio is an ideal indicator to use on a number of Markets including the Over 0.5 First Half Goal Market, laying the Half Time Score as well as a Goal to be scored during the Second Half with the Over Market.

Read on to find out how:

Using Almeria V Sociedad B for an example (as shown in the image below). 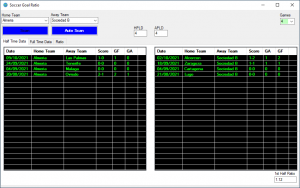 The Half Time Data Tab above shows the Half Time Score from the last 4 Games played for the Home Team Almeria and Away Team Sociedad B as well as the Goals For and Goals Against from those matches.

Choose the number of games played you would like to see data from by selecting from the Games pulldown, this could be the last 2 games, 4 games etc or Full History (from this season)

The Software then calculates the total number of Goals For and Goals Against and divides this by the number of Games Played to give us the Goal Ratio:

Goals For + Goals Against = 9 Goals in total 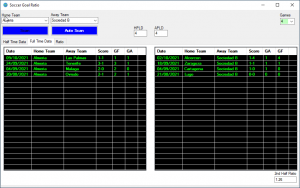 The Full Time Data Tab above shows the Full Time Score from the last 4 Games played for the Home Team Almeria and Away Team Sociedad B as well as the Goals For and Goals Against from those matches.

The same calculation applies to give us the Second Half Goal Ratio – 1.26

Goals For and Goals Against Combined Total 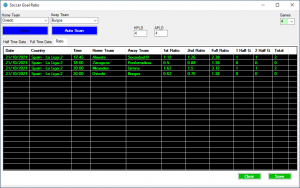 Continuing with Almeria V Sociedad B for this example we can see that the Software reports the 1st Half Ratio – 1.12, 2nd Half Ratio 1.26 and the Full Ratio 2.38, calculated from the total Goals For and Goals Against Combined. Therefore reflecting 1 Goal in the First Half, 1 Goal in the Second Half and giving us a total of 2 Goals as shown in the Total column.

Almeria V Sociedad B Half Time Score was 1-1, a goal was scored in the First Half – Over 0.5 First Half Goal Market = Winner! 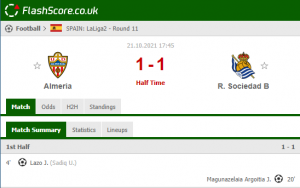 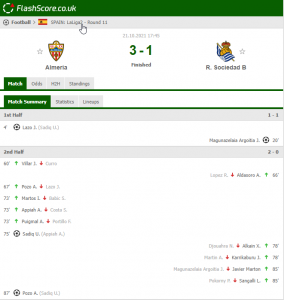 Features a Save to CSV option.

Compatible to run on any Windows